Tasmanian-based Marinova is the world’s only organic-certified producer of high purity fucoidan, a health-giving natural extract that sells for an eye-opening A$12,000 a kilo. Perhaps even more astonishing, the product is derived from an invasive pest…

The planet’s most expensive, naturally-derived substances command premium prices for a simple reason: they’re difficult to extract. White truffle costs gourmands around A$7 for a single gram precisely because the flavoursome fungus takes years to grow (and a well-trained nose to locate). Saffron is the stamen of a crocus that must be painstakingly picked from each flower –and thus commands A$15 a gram. And most expensive of all, Iranian beluga caviar fetches A$35 per gram because the rare beluga sturgeon must be decades old before it can yield its precious roe.

There’s now a fourth substance on nature’s rich-list: organic fucoidan. It’s harvested from the seas of Tasmania and costs up to A$12,000 a kilo or about A$12 a gram. In its most pure form, the extract can reach A$140 a gram.

So what is fucoidan?

Edible brown seaweeds – which contain fucoidan – have been prized in East Asia for centuries as a source of health and longevity.

Undaria pinnatifida is one such seaweed. It’s capable of growing to up to two metres in a year, quickly forming dense underwater forests. Native to the north pacific, it has been cultivated in Japan (where it’s known as wakame) since the 8th Century. 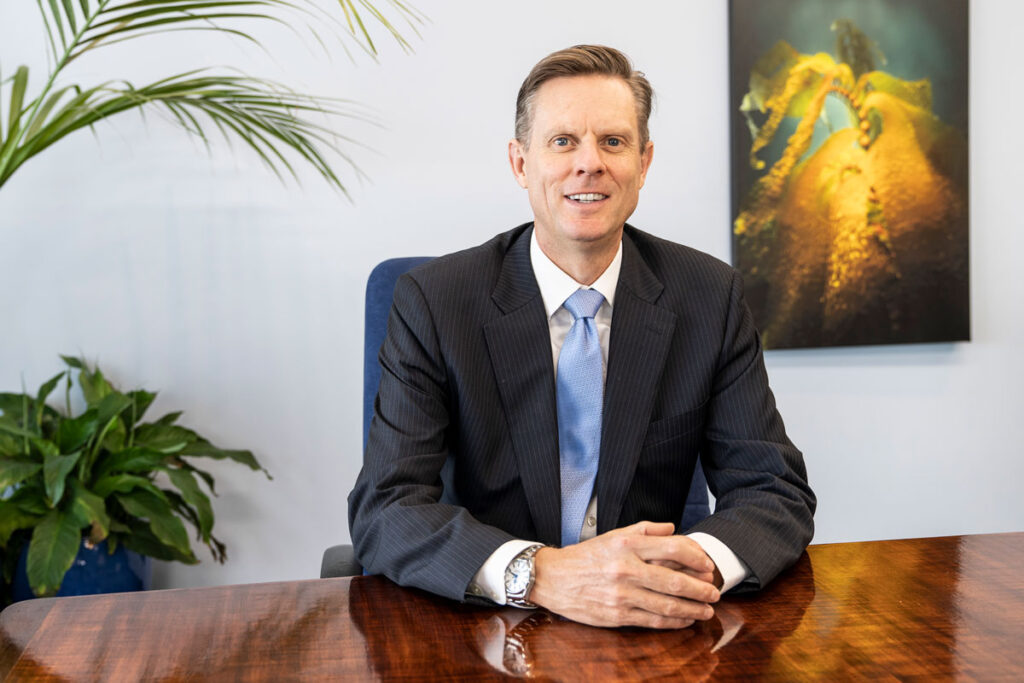 “About 40 years ago, Undaria pinnatifida was inadvertently introduced into the coastal waters of Tasmania,” says Paul Garrott, CEO and Managing Director of Marinova. “It’s believed to have come from Japanese woodchip vessels which were carrying spores in their bilge water. Undaria started to proliferate in pockets down the east coast of Tasmania, threatening both native species and the local seafood industry.”

In the late 1980s, the Tasmanian government classified Undaria as a ‘marine pest’ and issued an exclusive license to harvest the species. The seaweed is eaten extensively in East Asia (it’s an ingredient in miso soup), and the government reasoned commercial operations might help contain the spread.

At the time, Paul Garrott was an accountant based in Sydney and, along with his father Geoffrey, was looking to set up a commercial venture in his home state. Having secured the licence, they began exploring possible revenue streams, but it wasn’t long before they came up against a simple problem of economics.

“The seaweed grows in 10 to 12m of water and is harvested by commercial divers. That’s a very expensive way of harvesting a low-value, food-grade product.”

The pair set about identifying some higher-value opportunities, and after collaborating with consultants, became interested in the seaweed extract.

“Fucoidan is a long-chain polysaccharide that occurs naturally in brown seaweed and has a range of biological properties,” he says. “There’s been close to 3000 research papers published on its bioactivity.”

The Garrotts saw a demand for high purity fucoidan in overseas markets where it’s consumed or taken for benefits including healthy ageing, digestive health and immune support. Existing fucoidan producers were primarily small-scale operators in Japan and Korea selling to their domestic markets; moreover, many were using production techniques that compromised the purity of the compound.

“We developed a unique process that we trademarked as the ‘Maritech’ extraction process. Critically, it doesn’t involve the use of harsh solvents to precipitate the fucoidan compounds. Solvents aren’t good for the environment, and they’re certainly not good for the product.”

Marinova started out manufacturing its fucoidan compound through a pharmaceutical company in New Zealand, selling to a handful of customers. “Then in 2005, we had our first significant commercial success which gave provided the financial justification to construct a pharmaceutical-grade extraction facility here in Hobart.” 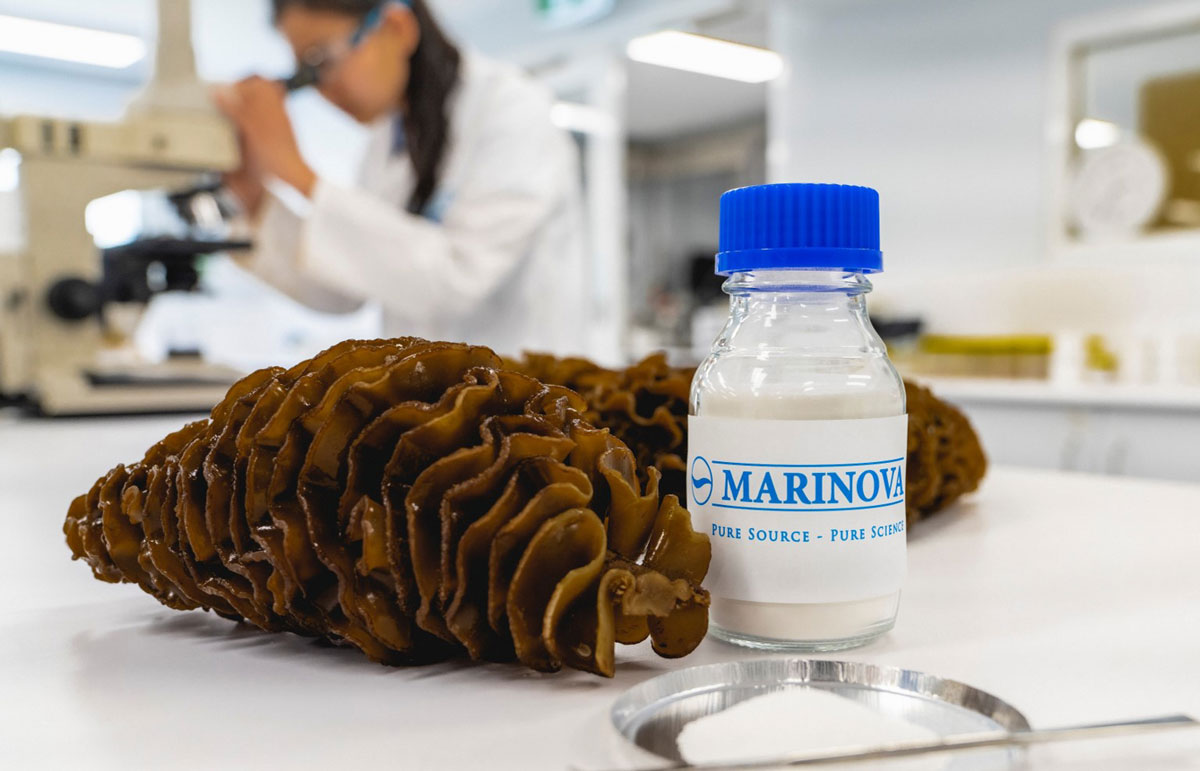 In addition to the extraction process, Marinova differentiated itself through its use of wild, hand-harvested seaweed growing in Tasmania’s exceptionally clean waters, gaining industry-leading organic certifications.

“Through the whole supply chain, we have systems and controls in place that enable us to essentially preserve and maximize the integrity of the final extract.”

Today, Marinova’s fucoidan products are priced according to purity. The company primarily operates in the human nutrition space, but its fucoidans are increasingly sold into a range of emerging high-value sectors including nutraceuticals, dietary supplements, nutricosmetics and skincare, as well as advanced medical research applications and pharmaceuticals.

“We are solely business-to-business, so there are no Marinova-branded products on any pharmacy shelves. We manufacture and sell these compounds to companies which incorporate our fucoidan into their formulations.”

Adding to its eco-credentials (and its bottom line) Marinova is on the cusp of being a zero-waste manufacturer. The company’s solid bi-product ends up in a commercial potting mix and its liquid bi-products are concentrated and supplied to organic growers in Tasmania. “We’ve managed to divert all those waste streams from landfill into value-adding,” says Paul. “Also, in Tasmania we’re fortunate in that we rely primarily on hydroelectric power, plus we have a significant solar array on our facility here in Hobart.”

From a handful of customers, Marinova’s client-base has grown to more than 90 clients in 35 countries. Paul says the company enjoyed sustained growth after 2005, but believes the accelerated growth of recent years was realised through an increased commitment to research and development. 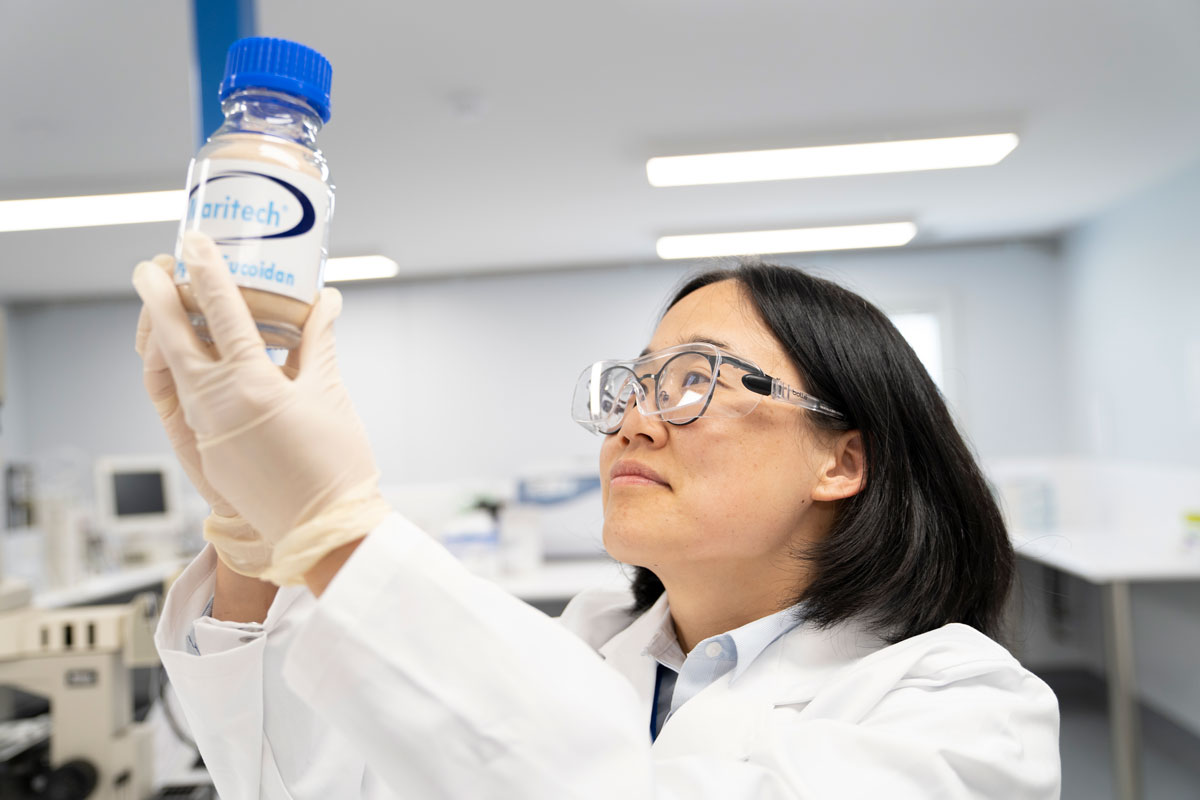 Each year, the company reinvests more than 20 percent of annual sales in R&D. “The value proposition for our products is very much linked to the research we undertake. It’s the science that has gone into validating the specific extracts that dictates the price in terms of our markets. It’s also about growing the demand – in our case, garnering interest from nutritional and pharmaceutical companies around the world.”

Marinova has committed $2 million to the Marine Bioproducts Cooperative Research Centre, a contribution into a much larger initiative which includes a $59m grant from the Commonwealth Government.

Paul says that two projects will be commencing shortly, conducted in association with MB-CRC partners Griffith University (Queensland) and the University of Tasmania: one focuses on a chronic inflammatory disease of the respiratory tract, called eosinophilic oesophagitis (EoE); the other builds on Marinova’s dossier of science relating to fucoidans and healthy ageing.

Marinova is also supportive of research into the possibilities of farming brown seaweed species for lower-price high-yield fucoidan. “If that could be done at scale, t