Karl Lawton is on the point of a breakthrough in the leading-edge science of microalgae bioreactors. Not bad for a bloke who only completed Year 12…

“If I’m asked at a dinner party what I do, I say I’m designing and building a biofilm-based enclosed bioreactor. And that’s when the dinner party guests go, ‘Well, what the hell is that?’ And I say, ‘I can’t really go into it because we’re still working through the patent process…’ 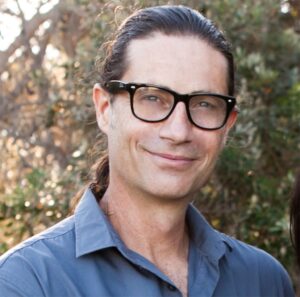 Karl Lawton is the 54-year-old director of Byron Bioreactor Technologies. His company is four years old, and together with a small team of one PhD student and a handful of advisers, he has designed and built a new system for growing microalgae – one that potentially leaves existing systems in its wake.

At this point, rather like Karl’s metaphorical dinner party guests, you may require a little background…

‘Microalgae’ is a collective noun that describes hundreds of thousands of species of single-cell phytoplankton that typically photosynthesize in water or sediment. They’re naked to the eye and sit at the bottom of the food chain but, as science has come to realise, they’re a tremendous bio-resource.

Harvested in sufficient quantity, microalgae can be used in human nutrition, as well as feedstock for biofuel and fodder for animals and fish. They don’t ask for much in their growth cycle (requiring only some basic nutrients, carbon dioxide and water), and if their environment is altered (for instance if the nutrient levels are varied) some species can be goaded into producing valuable products for use in pharmaceuticals and cosmetics.

Unfortunately, they require sterile growing conditions and their water consumption-to-yield ratio can be prohibitive. Moreover, they can’t be grown in sufficient densities to be commercially viable, especially for high-consumption/low-cost markets like animal fodder.

At present, microalgae species are commercially grown in water-based ‘photobioreactors’, usually raised in closed or semi-closed tanks, tubes and ponds.

In June 2022, Byron Bioreactor Technologies filed an international patent application for its design of a new system. There are still patent processes to be gone through and Karl is guarded about how the new design works. But this much he can tell us: it’s an enclosed panel measuring 1 metre by 1 metre and 500mm deep; it’s lightweight; and it’s modular and scalable, such that a grower could potentially stack 20 panels to reach the ceiling of a 10m-tall shed. 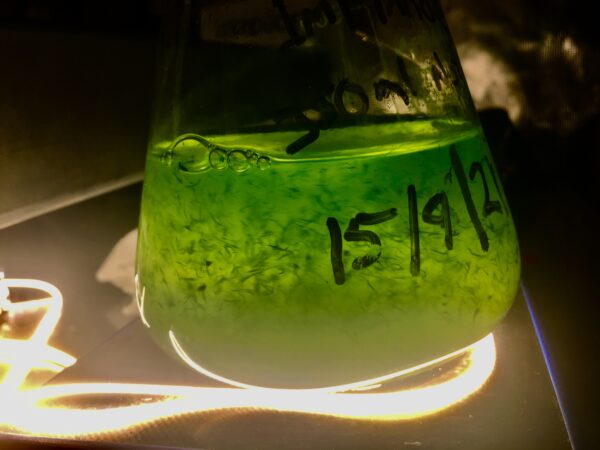 Getting Arthrospira platensis ready for inoculation into the pilot-scale bioreactor

Key to all this is the fact that the Byron system no longer relies on algae being grown in water.

“We’re growing microalgae as a biofilm – so it’s being grown on a surface. Because the system is enclosed, it’s protected from the environment to ensure it’s sterile. And it’s also fully controllable in terms of light, nutrients and water.”

Compared to existing systems, Karl’s design ensures the microalgae is watered but is not grown in suspension, so it uses a fraction of the water. It also consumes 25 to 50% fewer nutrients.

He says inoculation of the panel is easy (species can be swapped in and out) and sterile conditions can be maintained.

“With existing submerged systems you end up with a whole lot of water and a little bit of microalgae – and the yield has still got to be separated. When we harvest, we’re harvesting a paste, which is 15 to 30% of the cost per kilogram. And production is more concentrated.”

At this stage productivity comparisons are tricky. Karl says water-based systems measure their yield in grams per litre, whereas biofilm system productivity is  measured by footprint (ie. by the square metre). Nonetheless, like for like, he estimates his system increases yield by a factor of five.

At this stage, Karl’s dinner party guests would be forgiven for assuming he’s a trained scientist or an engineer with a row of letters after his name.

“I don’t have a science background,” he says simply. “When I left school, all I ever knew was that I wanted to run my own business. I just didn’t know what.”

Karl’s career pathway is best described as ‘unlikely’. He grew up on a merino sheep farm near Canberra, and had some interest in cropping and volunteered with Landcare. He also had a restless spirit and an insatiable curiosity, one that was satisfied by magazines like New Scientist and, increasingly, the ever-expanding universe that would become the internet.

He worked for the greater part doing agricultural jobs – including maintaining greenhouses, growing hibiscus flowers, tree planting and labouring on organic farms. But he also sat business courses and pursued projects. Three of these projects would come to exert an influence on his critical thinking and his skillset.

In the 1990s, Karl was part of operations to grow hemp. Even though the plant was ‘politically a bit on the nose’ he helped persuade Goulburn City Council to approve a two-acre trial site beside a sewage works. “They sprayed treated effluent on the hemp plants and they grew really, really well. But the project got out of control when locals thought we were growing marijuana, not hemp, so it started to break down from there. 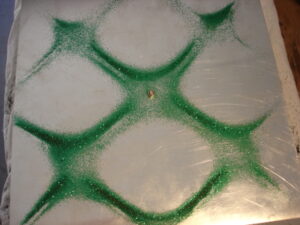 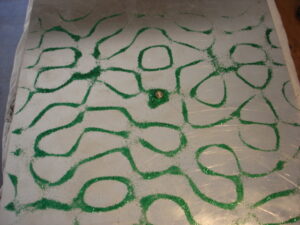 In the 2000s, he teamed up with a performer and started doing ‘art/science performances’ around the country. “We’d create heavy vibrations – sine waves – using equipment we borrowed from the Australian Defence Force Academy. We’d put these waves through containers of water or plates spread with glitter or sand, to create these amazing geometric patterns. The higher the frequency, the more complex the pattern. We were basically moving molecules and showing that movement in glitter and water.”

They performed at the Questacon science museum in Canberra to audiences of 250 and earned rave reviews. At a show in Byron, one member of the audience was so impressed he offered Karl a workshop and a place to live so he could continue his art/science development.

“Within two weeks, I’d packed up my life and moved to Byron.”

Karl’s new benefactor had a business making concrete ‘flowforms’. These organically-shaped forms are used to naturally mix and ‘enhance the energies’ of fertiliser and water, a practice used in biodynamic farming. Karl started making these flowforms, gaining knowledge in making moulds, formwork and the business of diverting water.

All the while he was still feeding his hunger for knowledge.

“I’m a researcher at heart,” he says, “I just can’t help myself – whether it’s the latest 3D-printing technologies, business models or how the human mind works…”

In 2017, Karl got particularly excited by microalgae, and in particular how it could be grown in controlled environments. “Typically in the farming game, you’re exposed to uncertainties – the markets, the weather, all the middlemen and other players. With microalgae, you’ve got full control over every aspect of its growth and its quality. If a market isn’t going to play nicely, or there are too many competitors, you can adapt to the prevailing conditions. You can swap out to a different species of microalgae, or start focussing on a different value component – you can move into vaccines or an oil or a commodity-based market like animal feed or fish feed.”

That’s when Karl turned his attention to the design of photobioreactors.